“I consider myself one of the most fortunate of men, to have lived at a time when some of the old Haidas and their peers among the Northwest Coast peoples were still alive, and to have had the privilege of knowing them.” Bill Reid – from introduction to The Raven Steals the Light, 1984. 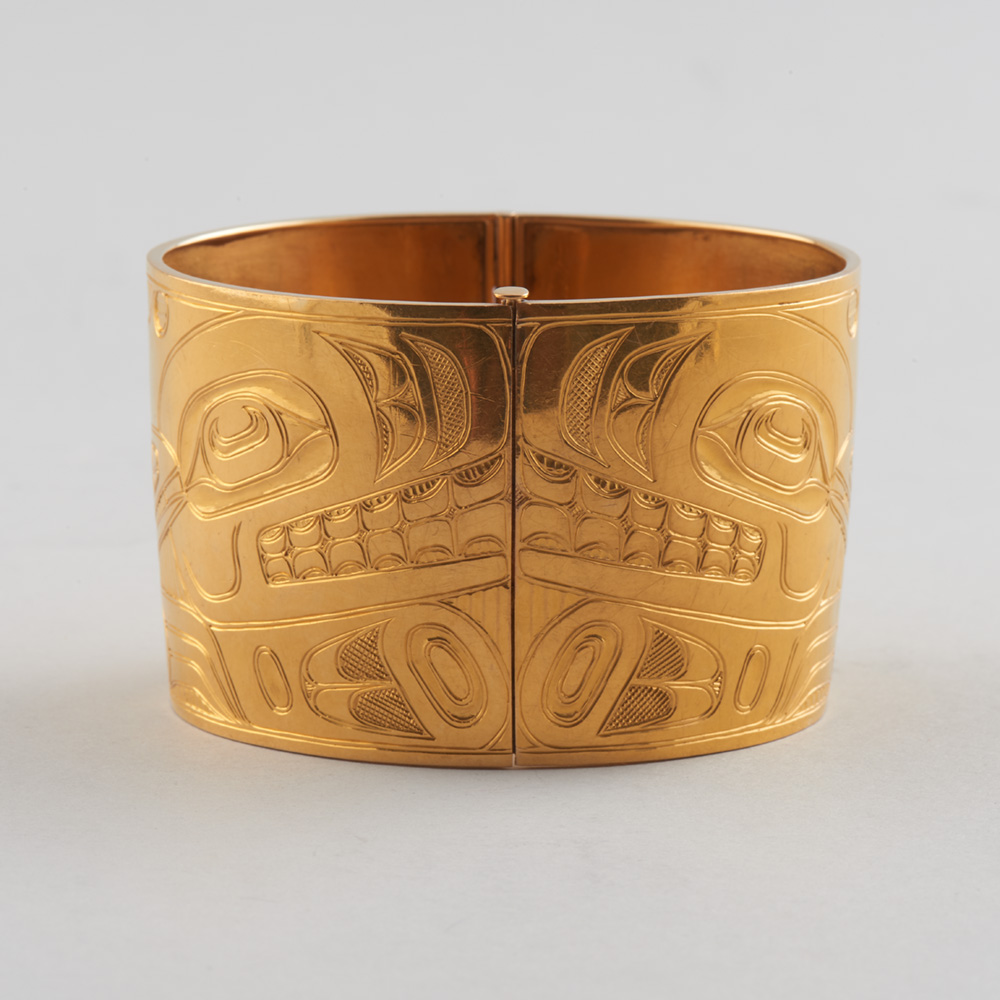 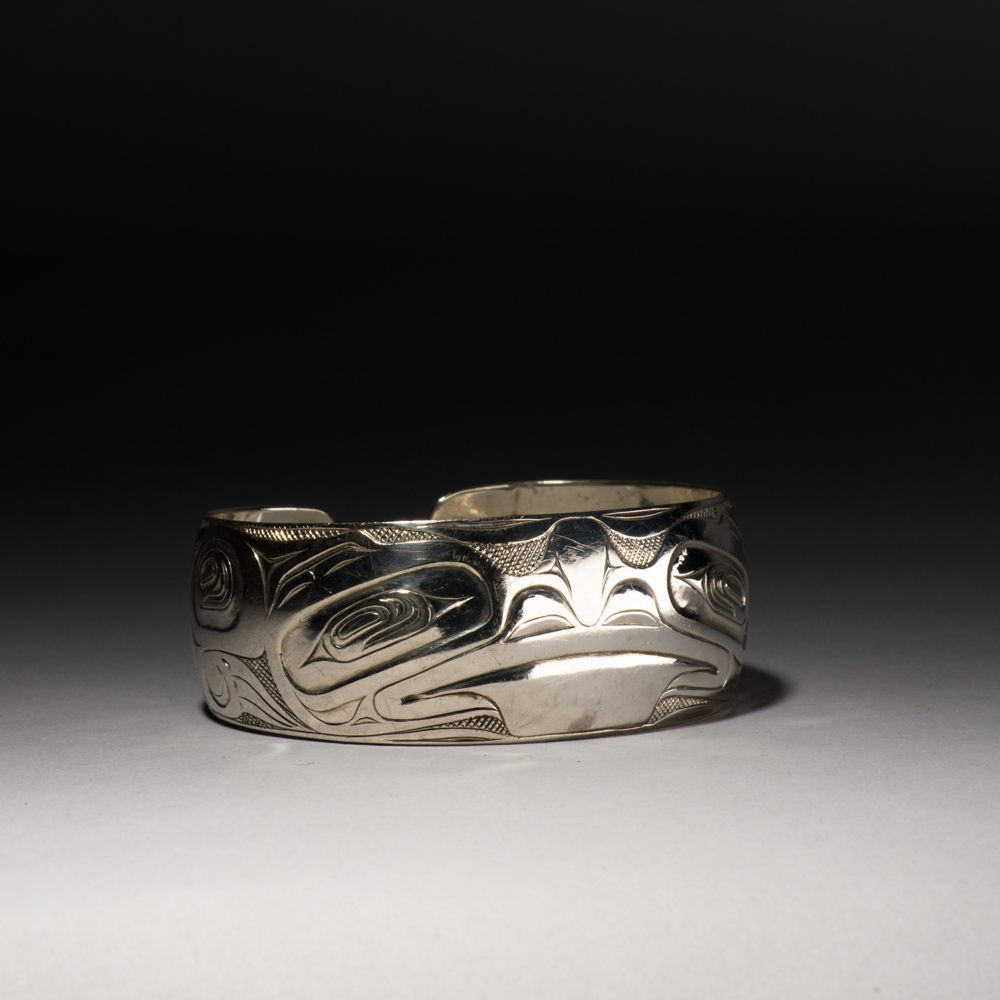 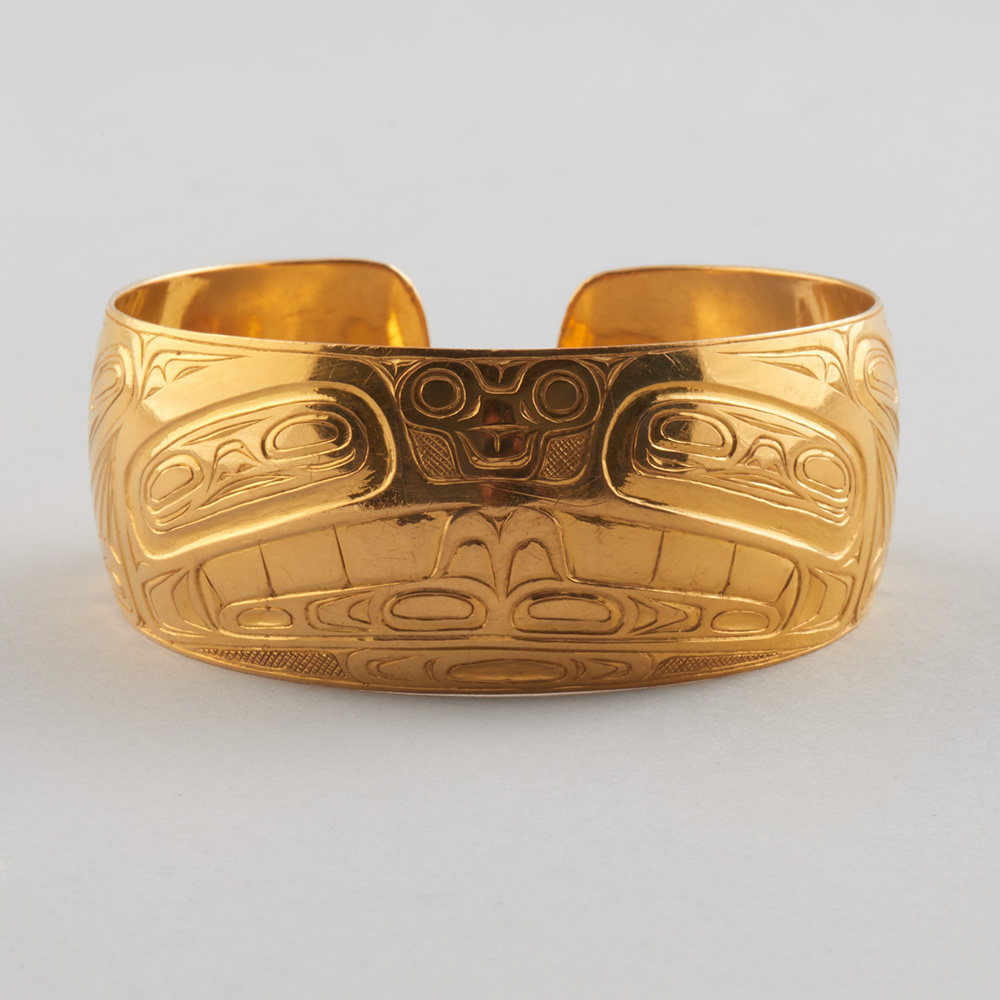 Recently, a large number of Bill Reid’s works were brought into the gallery on consignment. We haven’t had this many works in the gallery since 1997 when Reid was alive and we hosted a show titled “Bill Reid, Robert Davidson, Don Yeomans.” The title and scope of this show played on the theme of the “Tree Tenors” who were on their first collective tour and in North America at the time. Like the “Tree Tenors,” these three Haida artists had never been shown together.

This collection of artworks, however, is wider in scope than that 1997 exhibition. It was a great exhibition and we had about 700 people show up for the opening, lining up the block to get in but it was focused on one period of Bill’s artistic career. Our current collection represents a much wider range of his art. 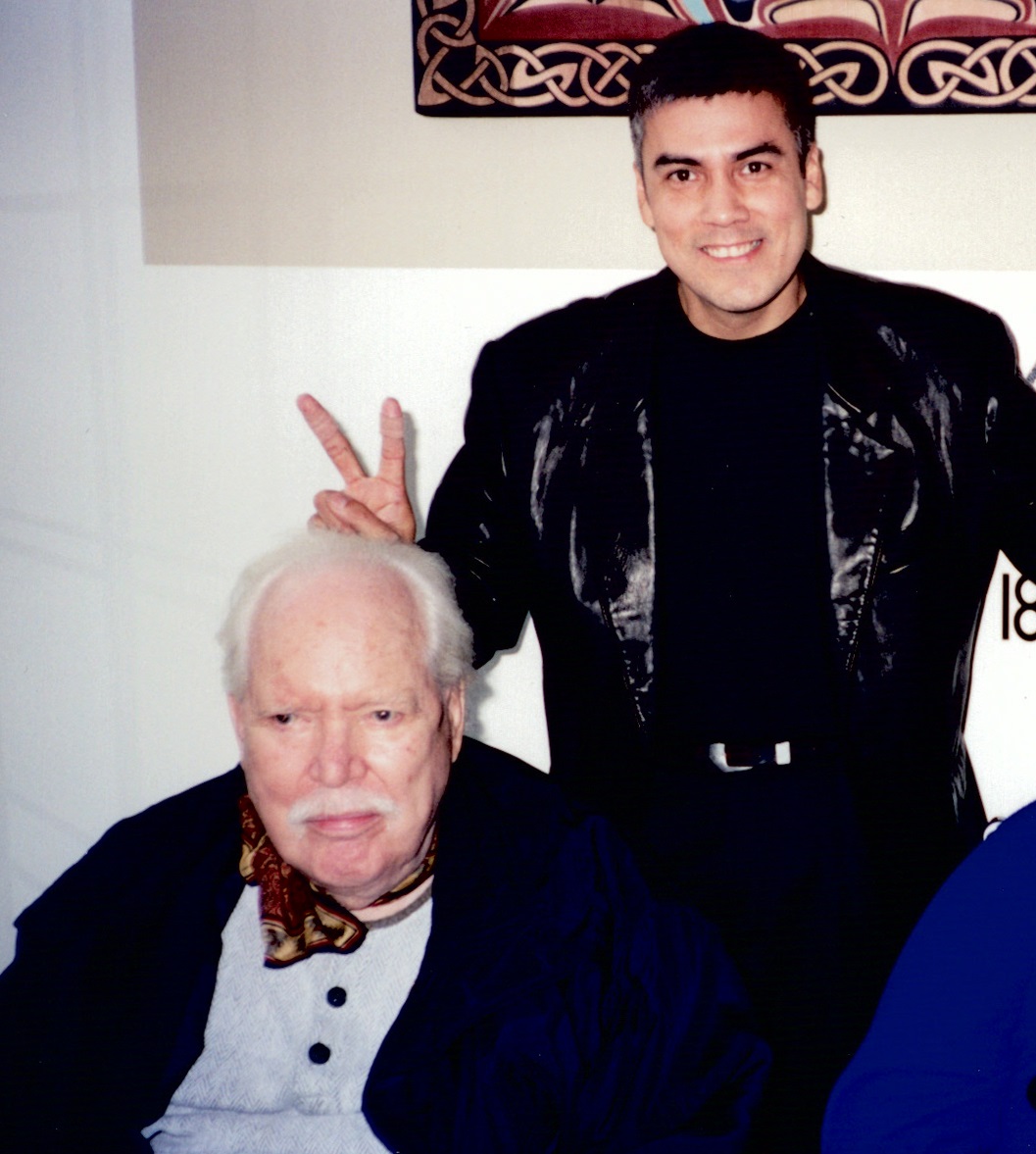 A young Don Yeomans with Bill Reid. Who is Raven in this picture?
WHO IS BILL REID?

When we create these newsletters, I often ask my staff to create a template for the dialogue. I laughed that “through google” they came up with the heading of “Who is Bill Reid?” My initial reaction was to say that our clientele already knows who Bill Reid is as an artist. Then the thought resonated with me and I realized that 20 years after Bill’s passing many know Bill Reid’s work but fewer collectors knew Bill personally. Who is Bill Reid? Bill was an artist, Bill was my landlord, Bill was a man so important that many felt honored to be in his presence. Bill was and still remains one of the finest Northwest Coast jewelers in the world today.

It is always a delight for me to touch pieces I have only known from photos or to come across works I never knew existed. I treasure seeing these “new to me” works of Bill’s as they bring back so many fond memories of times gone by. 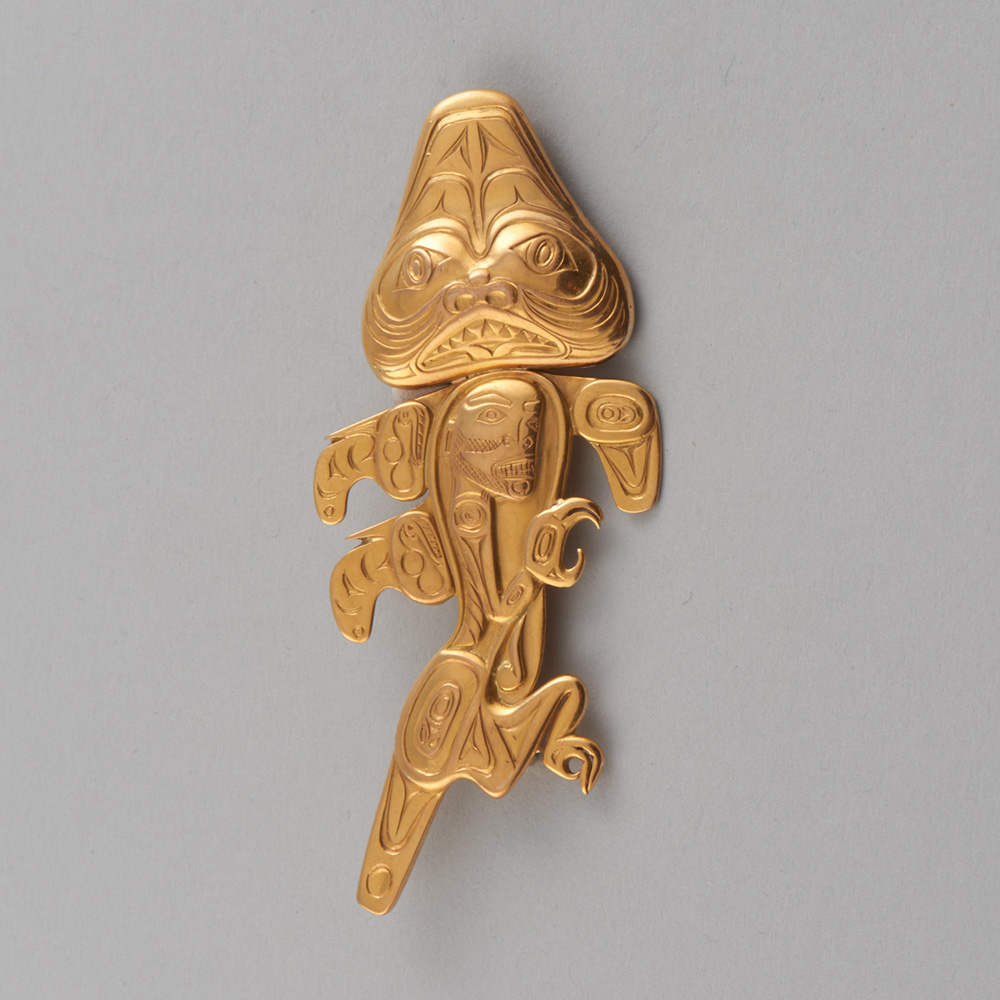 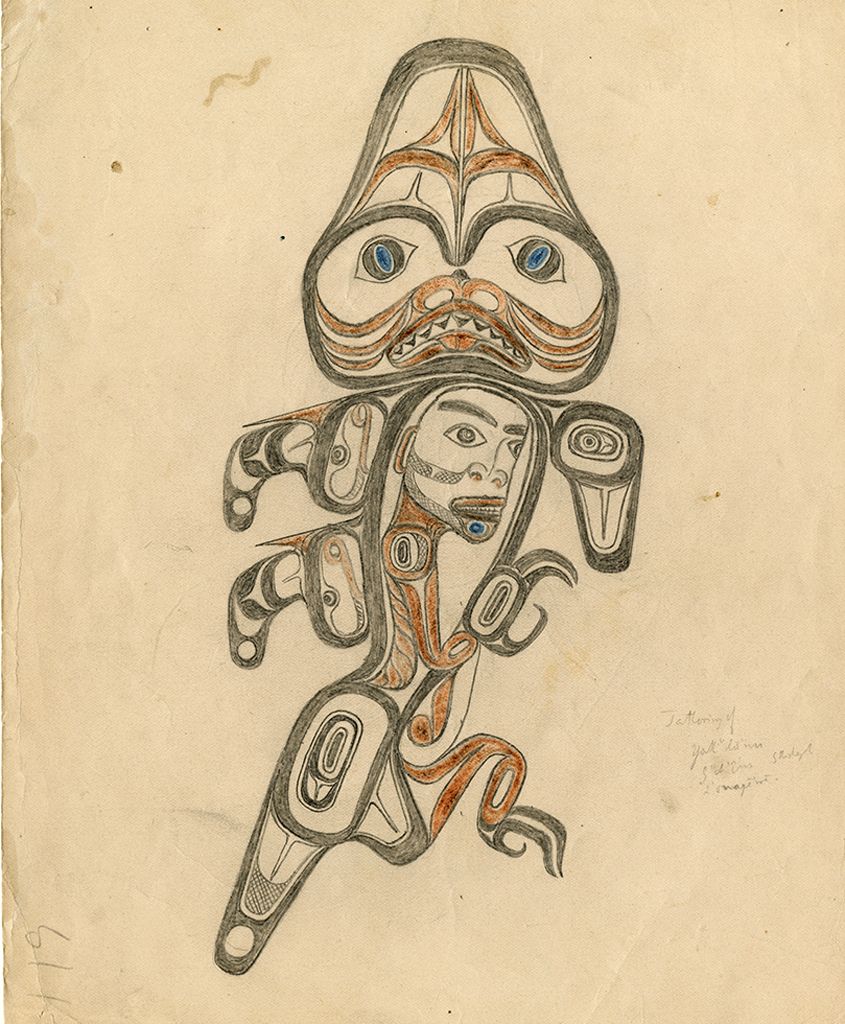 Reid’s earlier work was in part characterized by his study of Haida artist and Chief, Charles Edenshaw. This particular brooch is styled after an Edenshaw tattoo design and here you can see the original sketch, which is part of the permanent collection of the American Museum of Natural History (AMNH) in New York City. When Reid completed this Dogfish Brooch he told the owner he felt that this was the best piece that he had done to date.
WORKS IN SILVER
Frequently there are more works in silver than there are in gold for any artist. Silver is less expensive and financially more accessible to work with.  From silver to gold you are sometimes able to see the progression of an artist if they choose to carve a similar design. They will have completed the silver version first before attempting it in gold. I can’t say this on all of Bill’s engraved pieces but I would say I believe he would often carve a work in silver first before attempting it in gold, especially when looking at his earlier works. 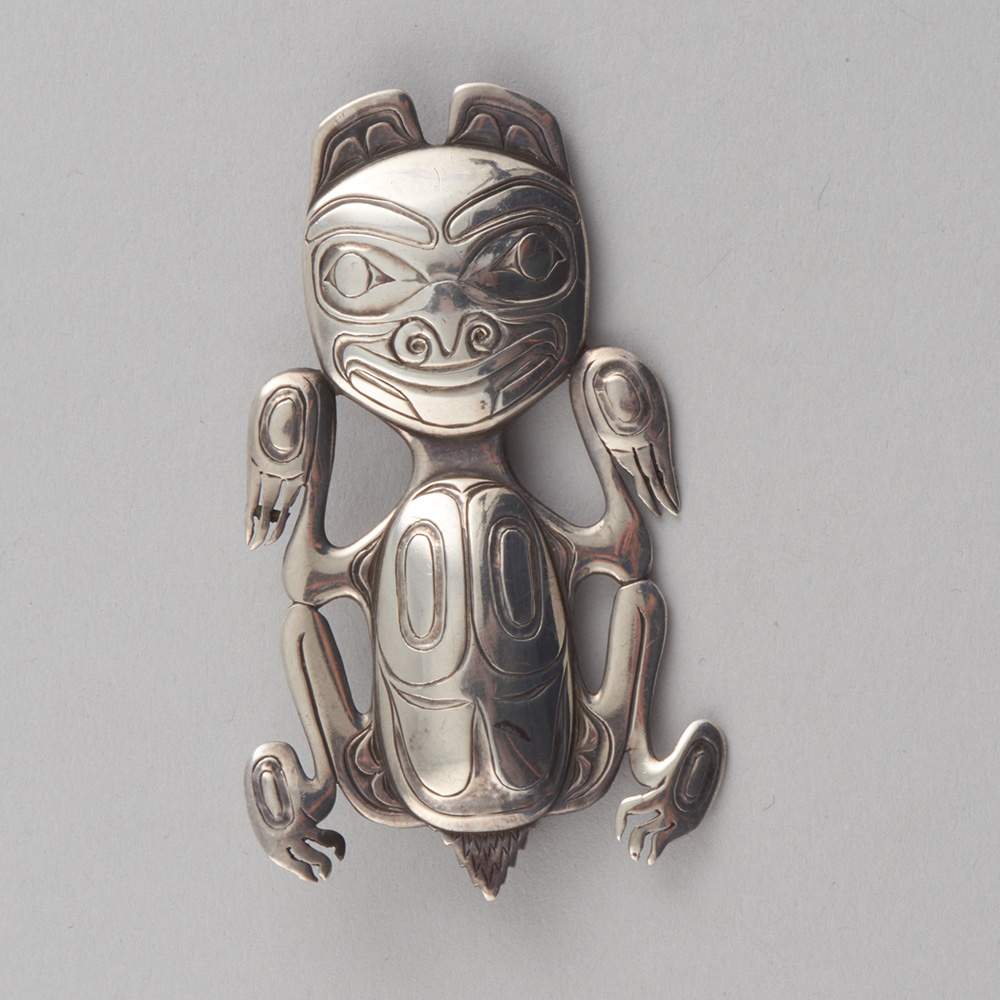 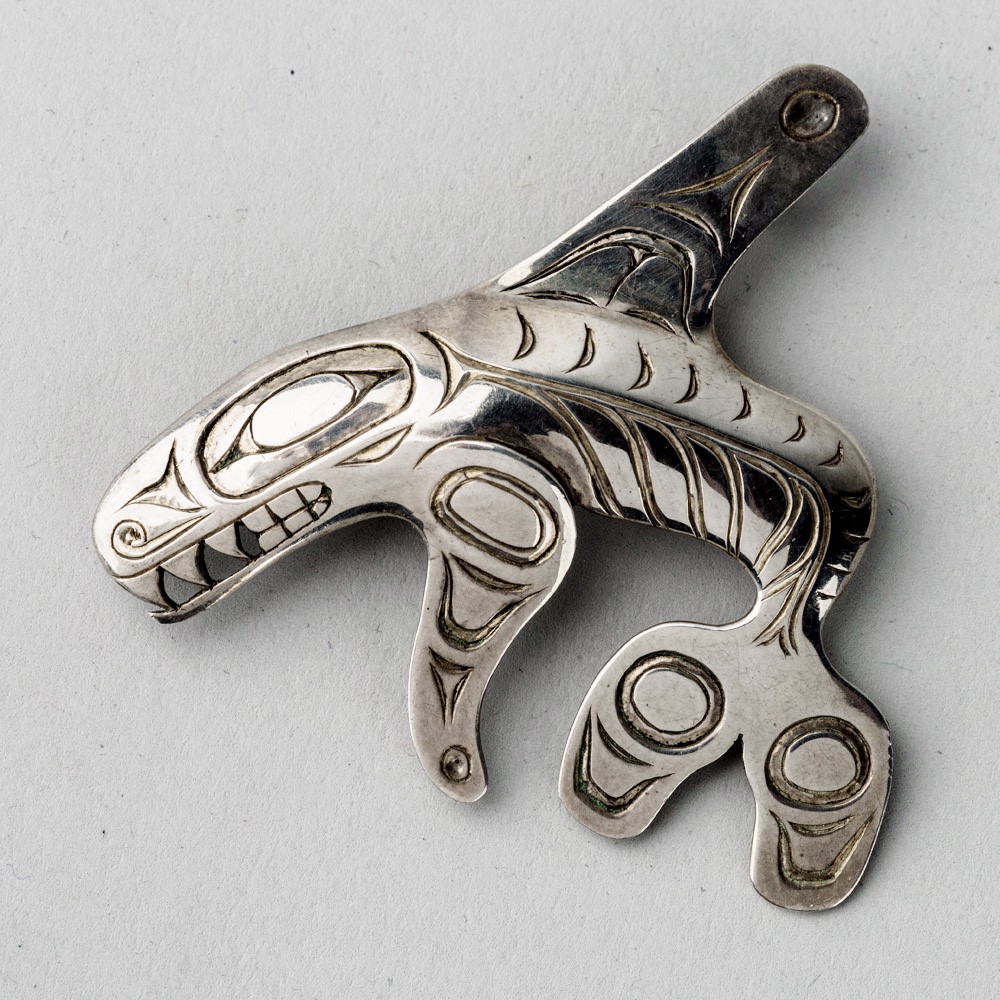 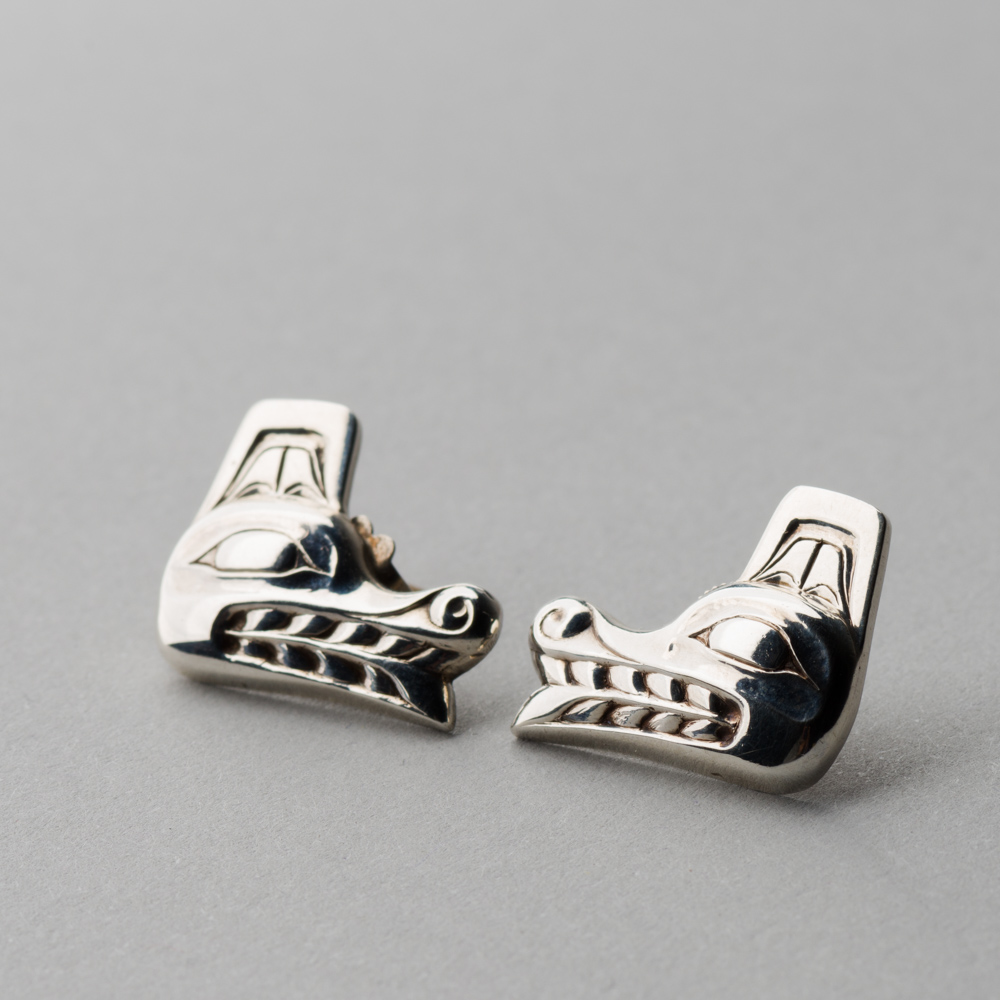 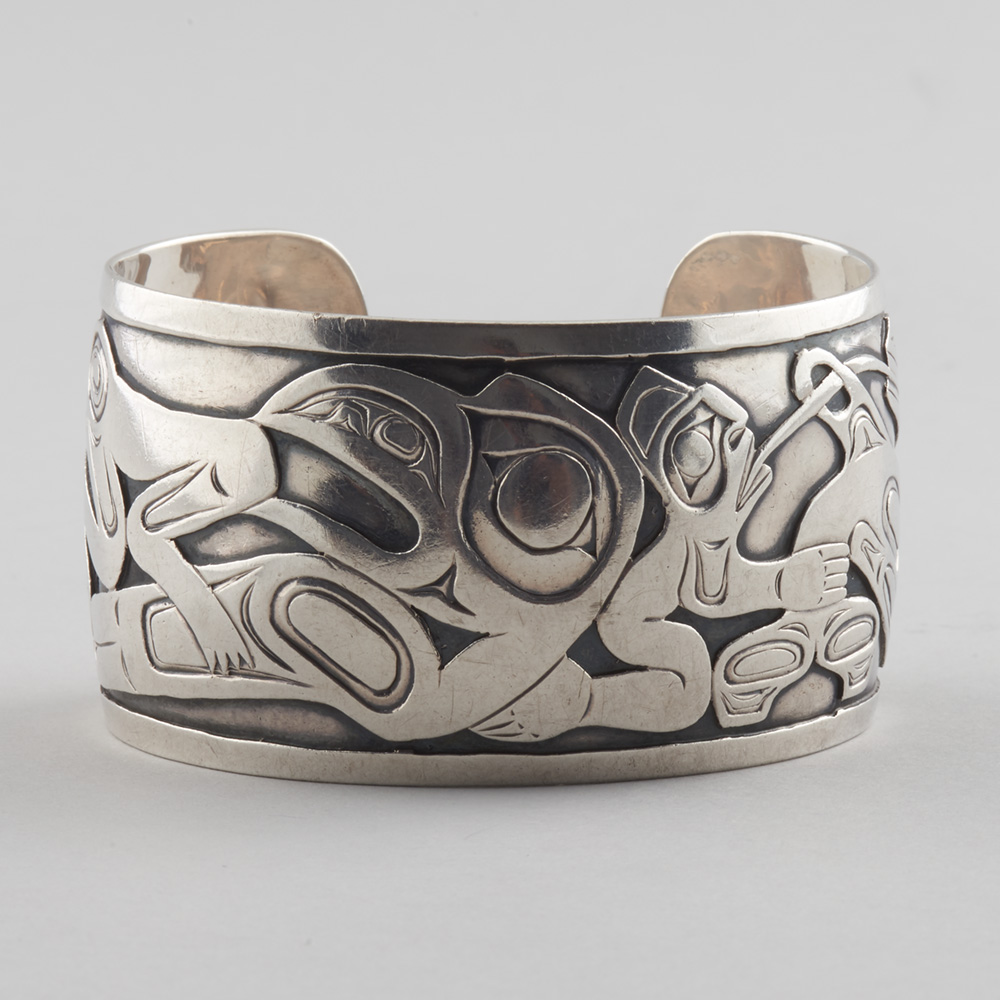 Bear, Frog, Eagle, Man, Killer Whale, Raven Bracelet, 1956
Bill Reid (Haida)
Sterling Silver
1 1/2″ W x 7″ L
$35,000 CAD ($26,800 USD)
COLLABORATIONS
As most people know Bill Reid died of Parkinsons in March 1998. He suffered from this disease for many years prior to passing, and much like Raven, he kept surprising everyone by having periods of recovery where he was able to continue his work. Near the end of his life when his hands would shake uncontrollably, he would grab a piece of wire and have a sudden calmness and be able to shape the wire into different animal forms. 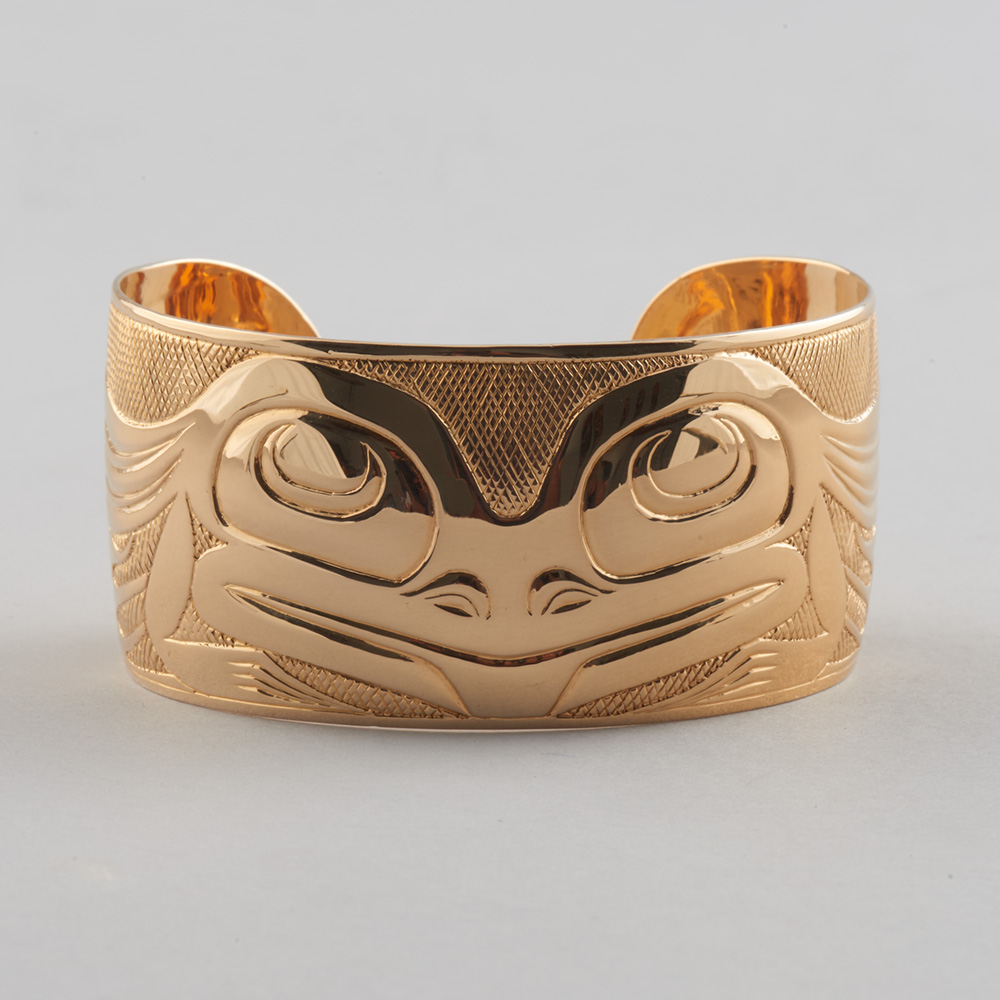 In the late 80’s Val Malesku began carving an 18kt gold bracelet with Bill. She had met Bill at least ten years prior when he was carving the Skidegate Pole in Haida Gwaii. The first project that Malesku worked on under Reid was the design for Loo Taas, Reid’s 50′ Haida Canoe. Over the years Malesku and Reid became close and she would often stay with Bill and Martine at their home while visiting Vancouver. During their time together both in Haida Gwaii and Vancouver, Val and Bill would often create together. The Frog Bracelet (pictured above) is the first bracelet she created with Bill and as Val says “he would carve some of the design when he felt good and then sit and guide me while I carved.”

Other artists who created things with Bill were often acknowledged as the maker or carver and himself as the designer. This reflects Ried’s European jewelry training. Inside of this Frog bracelet, the inscription reads, “Design – Bill Reid / Maker – Val.” The bracelet was completed in December of 1989 and has never been on the market before now.

When I look at this bracelet I see the similarities between this piece and Reid’s Silver Frog pin in which the frog’s body is defined by a series of parallel folds and ridges. These ridges are synonyms with Reid’s frogs and evident in many works from Phyllidula, 4′ cedar frog in the Vancouver Art Gallery’s collection to his small woodblock frog print, to name a few. 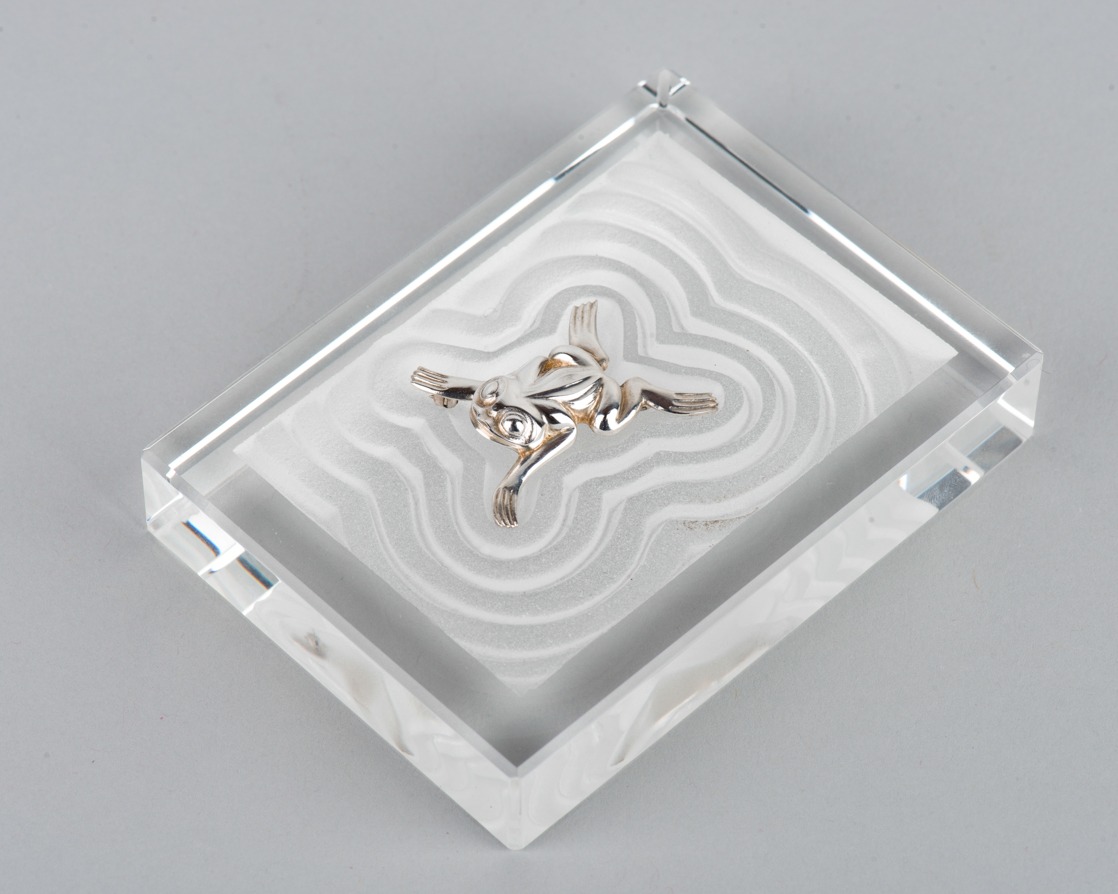 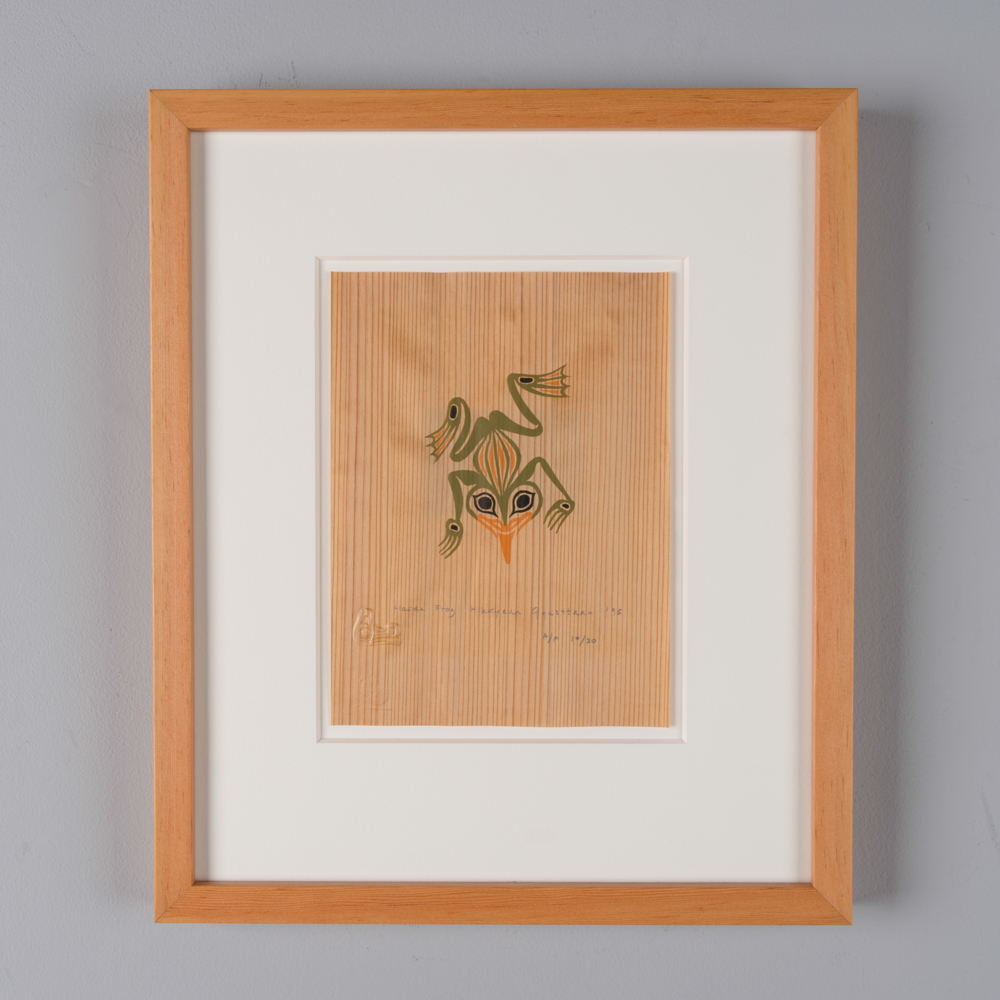 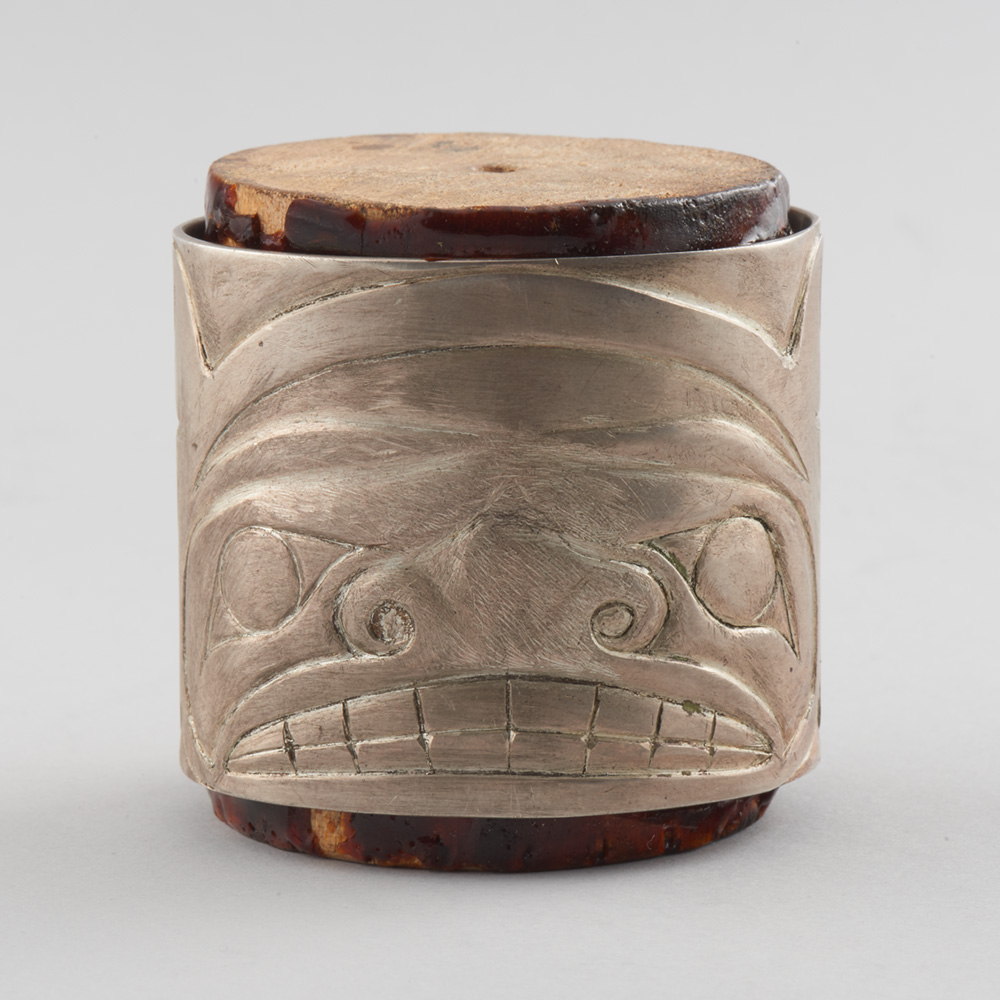 Acrobatic Woman, Unfinished, 1997
Bill Reid (Haida) / Val Malesku (Cree)
Sterling Silver
2″ W x 5″ L
$30,000 CAD ($23,000 USD)
This is the last jewelry piece Ried and Malesku worked on together and could be the last piece of jewelry Bill worked on before his passing.  The Acrobatic man/woman was another image I’ve seen of Reid’s that I do not know of other Northwest Coast artists carving. I’ve seen a few variations of this imagery in other Reid pieces, and Val said,
“…..when we worked on this piece together, Bill decided we should try roughing out the design with files instead of usual tools to see how the files would change how it looked. He often introduced me to people as his machine.”
A FEW LATE ADDITIONS 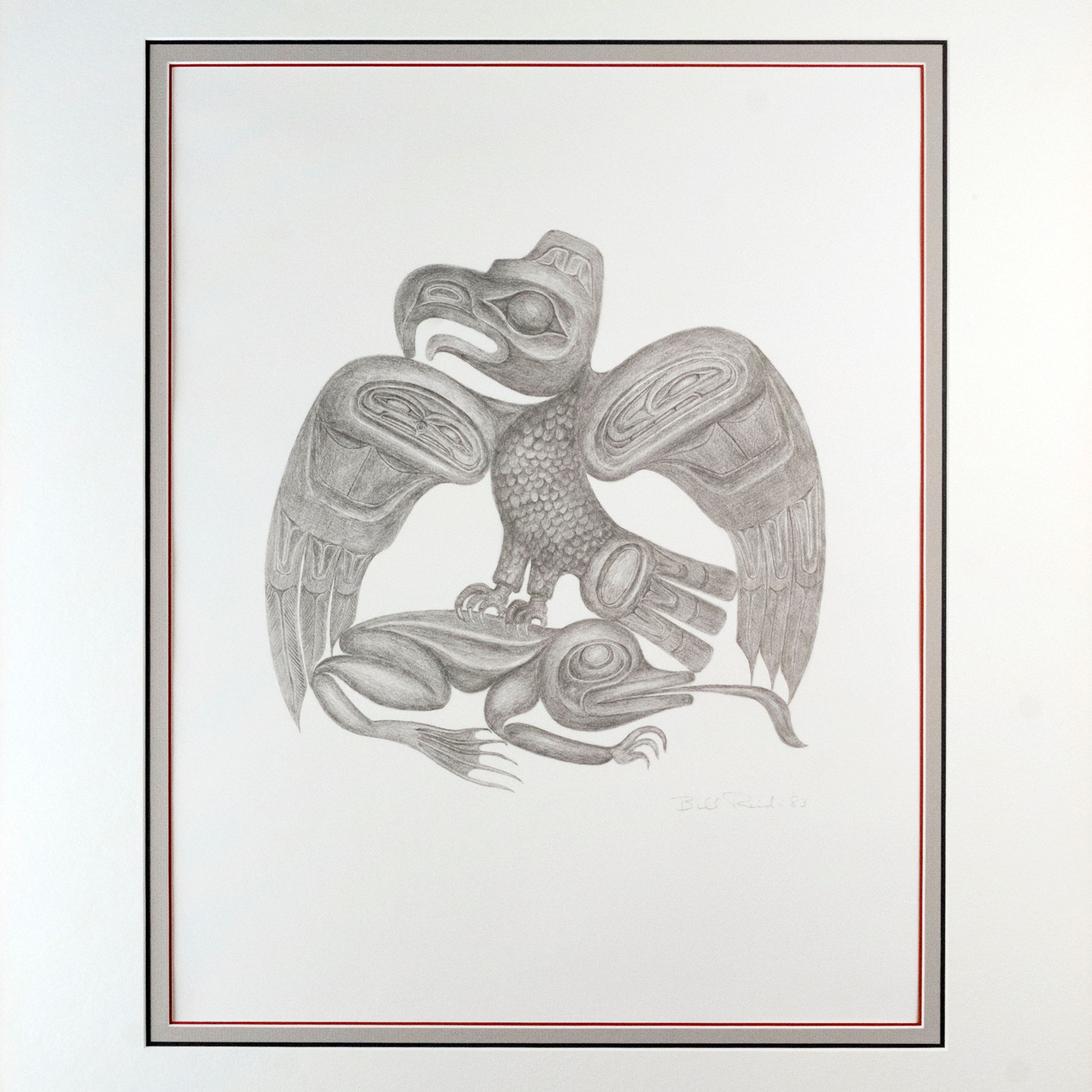 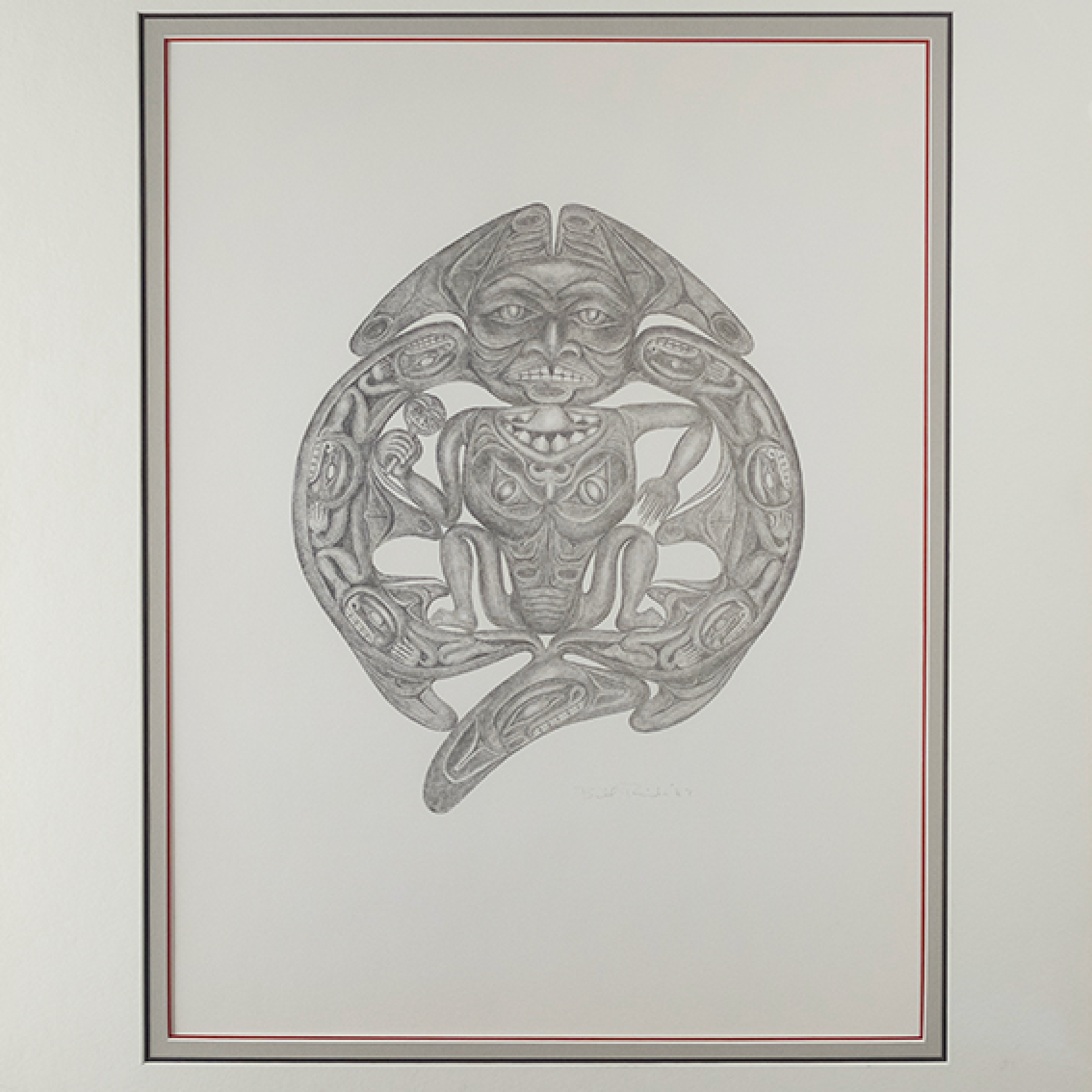 We were about to send this newsletter when I received a phone call from a client who wanted to sell two of Bill Reid’s original sketches. In the early 80’s Equinox Gallery hosted a solo show with Bill Reid. The show featured a series of pencil sketches that formed the book, Raven Steals the Light by Robert Bringhurst and Bill Reid. Reid then chose five of these sketches and created a portfolio of 200 sets of prints titled Haida Myths Portfolio.

Above are two of the original five sketches chosen by Reid to be included in the edition.

Designed and built at Flightdeck Media